His Every Need
Terri L. Austin 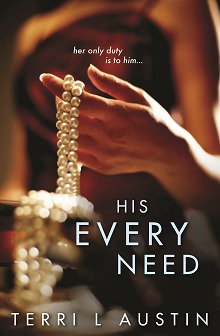 Allie Campbell finds herself in a little bit of a crises. Her mother died from cancer a few years ago and since then she has been in charge of the house, her father and her two younger sisters. When her father looses the house she does the only thing she can think of. She goes and talks to the new owner. One misunderstanding later , Trevor Blake finds himself in possession of Allie for the next two months.
Allie is prepared to do what ever it takes to keep the house and her remaining family together. If she needs to spend a couple of months as a sexual being, so be it.
Trevor, however, is not what she perceives him to be and for the first little while all they do is talk and spend time together. There is a lot of attraction between them and they do eventually act on it. He makes her loose his job so that she can be available to spend time with him whenever the need arises.
This story was not what I expected at all. I was assuming Trevor would be only interested in sex. That is just not so, he has depth and character to him. While he can be overwhelming and overbearing he can also be sweet and charming, when he wants to of course. Not that Trevor and Allie are spending parts of every day together they really get to know one another and the attraction is there. The sex is off the charts hot. But he is not quite ready to admit to feelings for her and in typical male fashion he is capable of spitting out some hurtful and biting words.
Between his parents and her family there is family drama all around. I thought both sets of families really added depth to the story and I enjoyed the character of his mother the best. She is truly hilarious. It was great to see how Allie is finally able to get some help with her family.
I thought that this story was a beautiful read. It had a great story line and was a delight to read. The characters were well fleshed out and the plot had the right amout of depth to it. I thought the love scenes were well done and did not overpower the story but were just the right amount of lusty. I would rate this story 5/5 and look forward to reading more by this author.
Posted by Unknown at 14:47