Azrael is a runner, he is responsible for transporting the dead from Earth to the Unearth, wherever they may be going. He has been working for hundreds of years without a vacation and he is tired, both mentally and physically. He is enjoying his week of solitude until Lilith interrupts him.


Lilith is married to the big guy in Hell, Lucifer aka Luc.  Seems the devil himself has gone down to earth to look for his runaway daughter Alia. However, Luc needs to return to Hell to keep the powers balanced so it now becomes up to Azrael to search for the errant Alia.


Down on earth, living her quiet life in a small town in Diane, the former goddess sister of Lilith. She had given up her previous life to embrace a new one as a bar owner on Earth. 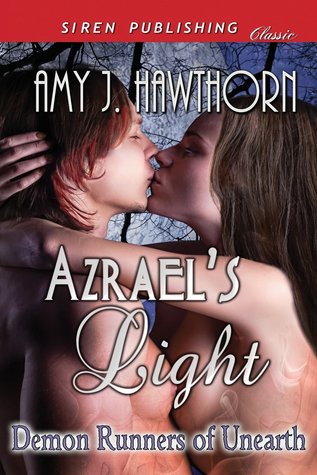 Azrael and Diane join forces to search for the disappearing girl. What a join of forces this becomes. Mentally, emotionally and physically they merge to conquer the mystery and find the girl. They attraction between the two of them is instant and hot. He exerts his dominance over her sexually and she just soaks it in. She has always wanted a lover to take control such as he is.


Life is not all sweetness and hot sex for these two as there are many battles to be fought.


There are mysteries to solve and even some lessons with fate to be revealed.


This is the first story in a series and I believe the author has done a great job of introducing all the main characters. I am looking forward to reading more. I would rate this story a 4/5.
Posted by Unknown at 18:54