Synopsis:
My student loans are due and I still haven’t found a job that pays more than minimum wage. So I decide to make an arrangement through The Club. I’ll get what I need…money to pay my loans. And he’ll get what he wants…access to my body…whenever and however he wants it.
ROSE COLLINS is a recent art school graduate with overwhelming student loan debt and no way to pay it.
JAE ROTHKO is a wealthy and renowned artist who doesn’t have the time or patience for a relationship
ae joins The Club so he can have one woman when he wants and how he wants with no attachments and no expectations.
He selects Rose to be that woman.
BLACK DOG NIGHTS is a SERIAL NOVEL, which unfolds in THREE PARTS (approximately 80 pages each). EACH PART has a CLIFFHANGER and EACH PART is .99 cents. (That’s $2.97 for ALL THREE PARTS.)

Meet the Author:
Ren Monterrey lives in a small town outside Phoenix, Arizona with her husband and their bloodhounds. She writes New Adult and Contemporary romance under a number of different pen names.
Social Links:
https://www.facebook.com/RenMonterrey
http://karenmuellerbryson.tumblr.com/
https://twitter.com/karenmbryson
https://www.goodreads.com/author/show/8393415.Ren_Monterrey

Excerpt:
By the time we get to The Rock Stop, the dance club is already crowded with twenty-somethings who all look eager to hook up with anyone who’s willing.
Two guys, who are already half-drunk, gawk at my breasts as I walk by. I wish there was another feature of my anatomy that garnered as much attention as my mammary glands.
I breathe a sigh of relief when I hit the relative safety of the bar area.
“What do you want to drink?” Cali yells over the loud Top Forty music.
“Would I look too conspicuous just holding a glass of water?”
She purses her lips at me. I tell her she looks like a duck when she does that but it doesn’t stop her.
“I’ll get you a beer. You don’t have to drink it but I don’t want you to embarrass me, or yourself.”
“Yes, Daffy,” I tease.
“I do not have duck lips,” she insists. 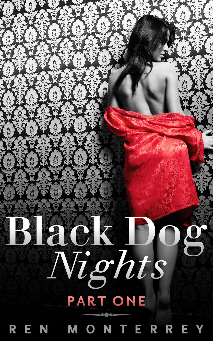 This story was gifted to me in exchange for an honest review. It is the first in a trilogy and each story is roughly eight pages long. This story line had been done before but the synopsis and covers grabbed my attention and I decided to give it a chance.


All I can say is WOW, this was a very fresh, quirky read that flowed effortlessly from page to page. So much so that when I finished the first segment, I was shaking my head in disbelief, there was no way, I thought I could have possibley read it already. I was aching to go and and thankfully had the next one at my fingertips. I confess I read all three in one evening. I had to. I needed to.


Twenty one year old Rose Collins has just finished college and has a Degree from the Chicago Academy of Arts and Design, no job and a very large student debt when she meets a girl at a bar that passes her a card for a new opportunity, to join The Club where wealthy men pay to have girls at their beck and call.


Jae Rothko is a well known artist who purchases the services of Rose. His wants and needs are simple and he is paying a lot of money for them.


“I want access to your body. That’s all, whenever and however I want it.”


They soon are having sex frequently and wildly. The arrangement is financially wonderful for Rose who has never had access to this kind of money, but soon she realizes that there are some bad points as well.


“I guess I didn’t realize how high the price actually was.”


Will the lure of the money be enough for Rose or will it be too hard on her heart? Will the cold hearted Jae ever loosen up to be able to express some emotions? Book Two is nearby and may shed some answers. I would rate this story a 5/5 and higher if I could.