Synopsis:
Gracelynn is drowning in an existence that fails to fulfill her. A ballerina by trade, she’s devoted her life to the stage, sacrificing adventure for discipline. When her boyfriend gives her permission to want what she’s not supposed to want, can she walk away? Or will she leap?

Jasper isn’t a man with many boundaries, and “sharing” a woman with his best friend is hardly a new endeavor. But the moment he meets Gracelynn he realizes she’s different. She leaves him feeling alive in a way he’s not used to, and for the first time in his life, he understands what it means to be wanted… Cherished… And he needs more…

But there are rules—rules that forbid Jasper from truly having her. As forbidden desire spirals out of control, Jasper has to decide if he’s willing to fight for something that doesn’t truly belong to him. His best friend doesn’t deserve her, but is Jasper strong enough to believe he does?

She followed the maître d’ to the back of the restaurant, and when he opened a door into a small private dining room, she took a deep breath and followed him. But that deep breath didn’t help her a bit when her eyes met Jasper’s as he looked up to her. She gasped, and his eyes popped open wide in shock. Ian’s back was to her, but as Ian clearly caught the shocked expression on Jasper’s face, he turned toward her, smiling broadly.
“I was starting to think you were standing me up,” Ian commented casually.
“What…?” She shook her head.
Jas stood at that moment, glaring angrily down at Ian. “You just don’t know when to leave well enough alone do you?” And then he looked to her, his face softening visibly. “I didn’t know you were going to be here.”
“Wait!” Ian cried, but there was a smirk on his lips. He stood then, holding his hands up to both of them. “It isn’t about that. I know you’re both pissed at me for that suggestion. Apparently the topic of sharing my girlfriend with my best friend isn’t one I can just throw out there off the cuff. I just wanted to make amends. You’re my best friend, Jasper, and Gray, you’re my girlfriend. I need things to be okay—”
“You need to get your head examined,” Jasper muttered as he stalked out of the room, breezing by her on the way. 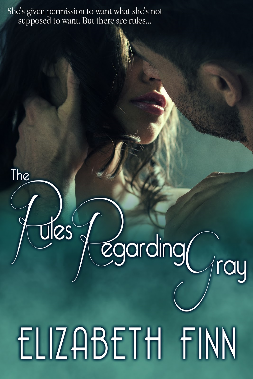 The Rules Regarding Gray


Elizabeth Finn
The synopsis of this story had me intrigued, it made promises of all the yummy things that I like to read about, a possible ménage, rules regarding sex and the promise of lots of sex. What more could I ask for. I thought this was going to be a quick read revolving around mostly bedroom scenes and I could not have been more wrong. This story had an unbelievable amount of depth to both the characters and the love scenes.

Gracelynn Gray has been in a relationship for awhile with Ian. She is a professional ballerina and it has been a while since she has allowed herself the security of a long term relationship. When her playboy boyfriend offers to allow his friend Jasper to participate in the bedroom she is shocked and then intrigued. Jaspar sees Gracelynn for the beautiful person that she is and at first he too is shocked and he refuses.


Without giving away anymore details, it is safe to let on that Jaspar and Gracelynn become very good friends. They talk and talk and talk. When Gracelynn needs a friend to take care of her during a crises, Jaspar is there while Ian is no where to be found. But remember the rules- no touching. The sexual tension is off the chart. This is becoming a beautiful love story.


This is the first time that I have read anything by this author and I think it will not be the last, I am looking forward to reading more of what she has to offer. I thought the story line was fresh and beautiful. I fell in love with Gray and Jaspar at the beginning and hated Ian for about that long too. Gray is such a strong and vibrant character and Jaspar, I believe is perfect for her. I would rate this story a 5/5.