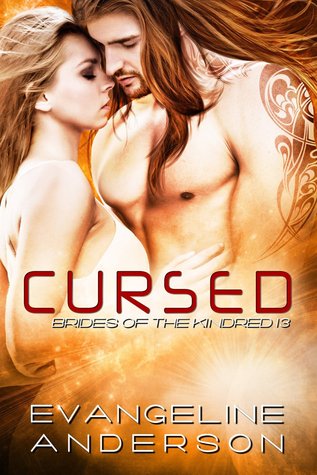 Cursed -Brides of The Kindred

This story was gifted to me in exchange for an honest review. I have personally read every single one of this series. I think it is one of the best sci-fi romantic series in books. I eagerly await the next installments.
Commander Stavros Rii has found himself almost stuck on Earth after they declared war, he was been hiding in shadows as not to get caught by EPB, The Earth Protection Bureau. One night as he is trying to get to the HKR Building he comes across an assault in progress and is unable to resist stepping in to help the girl in need.  Charlie Sayer is an EPB and she witnesses his helping the girl escape and then she captures him.   Unfortunately her boss is a bit of a dink and she ends up taking him back to her home.


Now Stavros is a Sin Eater, he feels the pain of others and when Charlie is experiencing some severe menstrual cramps he is feeling them with her and manages to get out off his bonds and get them both on the mother ship so that he can heal her. LOL, it was a really cute scene. I was definitely chuckling quite a bit.


Once on the ship things get a little bit more dramatic as they two of them need to band together in order to find the Heart of Love and try to save earth. They have to pretend to be a couple newly bonded and this proves to be quite difficult for them. There are some tender scenes in true Evangeline style as they get to know one another a little bit better. The tasks that are set out for them to complete are written with great imagination. The sexual scenes were also well done. I loved the cold room. The transparent clothing was also quite entertaining and the character with two heads was freaking me out too.


I have been a fan of Evangeline Anderson for quite some time now. This is an author that never lets her fans down and manages to write winner after winner of a story. I would rate this story a 5/5 and am anxiously awaiting my next visit with the Brides of the Kindred.
Posted by Unknown at 11:23