THE WILDE ONE is the second novel in the spicy contemporary romance series about four sexy brothers, their small-town bar and their local country band. Each novel in the OLD TOWN COUNTRY ROMANCE series can be read as a STAND ALONE NOVEL or as part of the SERIES.

Tucker Wilde joined the United States Army right out of high school and was injured in Iraq. But more than just his leg was shattered in the Middle East. The war also crushed his spirit and damaged his soul. When a strange couple arrives at his family’s bar, Haymakers, Tucker can see signs of mental and emotional abuse and is immediately drawn to the lovely but fragile girl seated at his bar.

Gracie Parker has been a victim of abuse her entire life. When her boyfriend, Dex, beats her in the parking lot of Haymakers and abandons her, it’s almost too much for the nineteen-year-old to bear. That is until Tucker appears like a warrior knight from the darkness to save her.

Tucker and Gracie are two broken people who are immediately drawn together. But their relationship and even their very lives are threatened by Dex who will stop at nothing to get Gracie back.

If you like your trucks loud, your beer cold and your men hot...you'll love THE WILDE ONE. 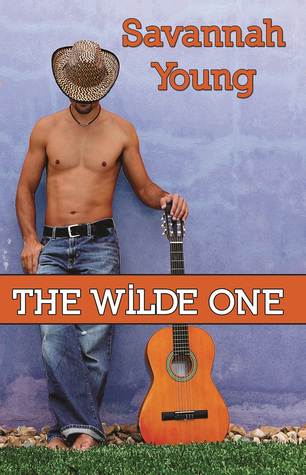 MY REVIEW
This is the second story in the Old Town Country Romance Series. Both of them are very sweet country stories based on the boys of the Wilde Family leaving in Old Town running the local bar called Haymakers.

Tucker Wilde has serious self esteem issues. He was badly injured in Iraq and his leg is severely disfigured. He thinks that he is not worthy of being loved and has not been with anyone sexually since he came home.

Nineteen year old Gracie Parker is in a horrible situation. She was traded to her now boyfriend Dex as a seventeen year old to pay off her father's gambling debt. He treats her horribly and is both physically and mentally abusive.

One night changes things forever for these two wounded souls. Dex brings Gracie into Haymakers and then leaves her there after slapping her around. This brings out the protectiveness in Tucker as he moves her into the family home to care for her. They are two peas in a pod and they slowly become comfortable around each other and the love begins to blossom. He cares for and nutures her, something that she has never experienced, she looks at him, but especially looks beyond his bum leg and this is something that he has never experienced.

This story was truly moving as they blossom for each other. He awakens desires in her as he shows her how a lady should be treated and how wonderful sex can be. She accepts him how he is and he begins to hope that he may actually have a future worth living.

Of course Dex is not quite ready to let go of his so called property and is still around to cause some upsets. This only brings out more protectiveness on Tucker's behalf.

I really enjoyed reading this story. It was an honest to goodness, straight from the heart love story. It was fast paced and I was kept entertained from start to finish. Even though it is part of a series, it could be a read alone, but I love how series go together, love how we really get to know all the characters throughout. I would rate this story a 5/5 and look forward to reading the next one.
Posted by Unknown at 22:47