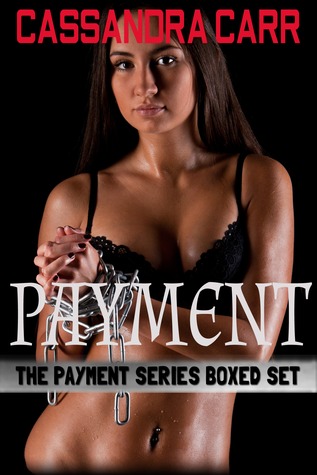 The Payment Series
I have read quite a few stories by Cassandra and I have loved them all. They are mostly light, easy to read love stories with some funky sex thrown in. This was going to be a completed different type of story. I could see that just from the blurbs. I was excited to be part of this change in venue.

This story was broken down into three parts Prized, Possessed and Purgatory or as I found out could also be termed Before, During and After.

Catrina Carter has gotten herself into a little bit of a pickle, she has amassed a large debt and needs some help. She goes to Debt Management Associated and basically sells herself into sexual slavery for one year. Raoul at the agency is in charge of her "training." This definately starts of with a bang. There are OTK spankings with both his hand and belt, some flogging, corner time and then plenty of time spent working on her oral skills. Then she is auctioned off to become the property of Jared whom she must refer to as Sir.

Jared and Catrina share an interesting arrangement. He takes his responsibilities very serious and he means to teach her how to be financially responsible. The means to accomplish this are simple. Many, many, many spankings, sometimes both morning and night. Also more and more oral skills need to be learned and practised. He allows all of his friends to come over to participate in teaching her the lesson and makes her repeat her mantra "I am being punished because I can't control my spending." Anal sex is big also and again Catrina is expected to service both Jared and whom ever else he decrees at the time. Jared is a big believer in sharing and does so on a daily basis, it could be men at work, friends or once it was even the cooks in the restaurant they were eating in. Catrina's main purpose in live becomes as a human receptacle to whomever and where ever Jared wants it to be.

Even without love being involved I found this a very gripping story. It was not overly dark, she never really got hurt, just a little bruised, welted and reddened. It focussed mostly on plenty of spankings and some humiliation. I mean really she never knew what was going to be expected of her, how many spankings she was going to endure, with what insturment or even at whose hands. When she allows herself to mouth off, the spankings just seem to get longer and longer.

I found myself enjoying it and eager to read more. I wanted to know if she would take her lessons to heart, and what would happen after the year was over? Does she continue on with her schooling or does she revert back to type? Do they really have any feeling for one another?

This story was completey out side the box and my normal comfort zone. I loved that Cassandra Carr made me think. She really makes the reader pay attention, scared that you might miss something in this story that has captured your interest and secured your thoughts. I was up late one night reading and then early the next morning to finish it. Well done. I would rate this a 5/5.
Posted by Unknown at 13:08