SYNOPSIS:
More than anything, Arizona Condors first baseman Greg Bartlesby wants to make his own name in the big leagues. Too bad being the son of MLB legend Jake "Big Man" Bartlesby makes that impossible. Even worse? His failed attempts to differentiate himself from his old man frequently land him in legal trouble. His latest brush with the law brings him in contact with an attorney he’s met before — as a dancer at the club where he was arrested for protecting her.

Jenn Simpson isn’t a stripper—not that she can convince her idiot client her twin is the one doing the dancing. When Greg offers her sister a job at his father’s Foundation, Jenn is the one who accepts. She soon discovers she likes the work—and her boss—more than she should. The closer they get, the more important it becomes for her to convince Greg she’s not who he thinks. And when his father is hospitalized, compelling Greg to fast-track his leap to the majors by capitalizing on Big Jake’s fame, it might be too late to come clean.

Jenn waited for the judge to exit the courtroom and then did the same. She barely noticed Greg was a step behind her.

When she realized he followed her, halfway down the corridor, she stopped and turned. He was watching her closely, his face nearly as severe as the judge’s had been. She didn’t like the scrutiny. She didn’t much like him, either, for that matter. He talked too much. "What?"

"You’re a much better stripper than you are a lawyer."

"I’m not—never mind." This spoiled man-child’s opinion of her was of no consequence whatsoever. "Things would have gone much more smoothly if you knew when to shut your big mouth."

"Or if you were as familiar with law as you are with the pole."

Letting him think she danced was one thing. Listening to him insult her sister’s current livelihood was another. "You think you’re so much better? Have you forgotten you play with balls for a living?"

With that, she walked away. Folks with more money than sense always rubbed her wrong, this one more than most.

He swore, and soon his footsteps sounded behind her. He put a hand on her shoulder. "I’m sorry, Jade. My comment was uncalled for."

She stopped and shrugged him off. She wasn’t about to apologize, even if her comment, too, was out of line. He started it. "You have a right to be testy. I certainly didn’t hold up my end of the bargain."

"To get me off?" One corner of his mouth lifted. "You sure didn’t."

Ooh, that half-smile was appealing. Too appealing. She stepped back, away from temptation. "Judge Troxler is tough."

"Believe me, I noticed."

"A little bit of everything." He shrugged. "But the main focus is helping underprivileged kids."

And that had him out of sorts? Growing up with four siblings and an out-of-work father, she’d been an underprivileged kid. They’d practically lived on sandwiches made from cheap white bread and pale yellow government cheese. "You have a problem with helping those less fortunate than yourself?"

"Of course not." His look was undecipherable. "I just don’t do well with kids. Can’t relate." "I’d think kids would love the chance to meet a famous ballplayer."


And that galled him. It was evident in his clenched jaw and drawn-up shoulders. Against her

better judgment, she found herself wanting to boost his ego. Since she’d had a few minutes to read up on Greg Bartlesby, first baseman, before court, she knew exactly how to go about it. "If you’re as good as the sportswriters say, you won’t be in the minors for long."

Advance Reader Copy Not for Sale or Distribution

"Four years and counting," he grumbled. "And when they get wind of this, it’ll probably be another four."

"MLB officials. Dad says no one’ll call me up to the majors until they have proof I’m mature enough to handle it." He scowled. "Right now, my ‘wild’ behavior makes me too much of a risk."

Far be it from her to point out that brawling—even in defense of a woman—wasn’t all that mature. Still, newscasts were full of pro athletes arrested for offenses far worse. "Why don’t you use your community service sentence to show who you really are to whoever you need to show?"

He looked thoughtful. "That idea’s not half bad."


Before she realized what he was going to do, Greg swooped in to capture her in a bear hug.

He was all muscle, a solid wall of yum, and her body molded itself to him effortlessly. She tipped her head up to look into his eyes, the color of the summer sky right before a thunderstorm. Blue so clear and deep she could lose herself.

She was so caught up in the moment that the passerby registered as no more than a shadowy shape—until he stopped, turned and stared. Her boss. Mr. Stull didn’t say anything, but his disapproving frown spoke volumes.

Caught in a clinch with a client? Oh God. How embarrassing. Even if the contact had started out purely innocent, her response made it inappropriate.

She squirmed out of Greg’s arms and took a few steps back. "Mr. Stull! What a surprise!"

"No doubt." He pursed his lips. "Shall I assume you were merely celebrating the case’s positive outcome?"


"We ran into a snag. Judge Troxler heard the case."


Greg stepped forward. "That woman is not a randy old goat." He shook his head, bemused. "Immune to my charm, too."


"Nothing good." Jenn hung her head, ashamed. In less than thirty minutes, she’d let down the defendant, the client and her boss. Not a stellar way to start the week.

"It was my fault, not hers." Greg’s hand settled on her back. "I let my temper get the best of me and mouthed off to the judge."

Doing her best to ignore the way his fingers burned through her cotton shirt, she met her boss’ eyes again. "I failed to adapt. I’m to blame."

"I’m sure there’s plenty of blame to go around." Mr. Stull’s expression was sour. "Jake Bartlesby will not be pleased."

Greg’s palm flattened against her back. "Leave my father to me."

Leave it to the rich man to keep his fridge stocked with expensive French cheeses.

Sometimes she wondered if he had more money than sense. Or maybe he just really liked cheese. "Is it Wisconsin cheddar?"

He thumped a brick of white cheddar cheese onto the counter. "All-American girl, are you?"

"Mm-hmm." She eyed the solid lump of cheese. "I assume you have a cheese grater."

He hummed Tom Petty’s "American Girl" as he fitted his fancy food processor with a shredding attachment, cut a couple chunks off the brick of cheese and threw them down the chute. Seconds later, he presented her with a bowlful of shreds. Perfect. Just like Greg.

Excerpt (3):" … You promised me dinner." She dug her fingers into his knotted shoulder muscle and started to work out the kinks. His bat dropped to the ground, wood thunking against concrete. "I’m hungry."

A low, guttural sound—could have been groan or growl—rumbled from his throat as he whirled to face her. He settled his hands on her waist and hauled her against him. "Me, too."

Then he captured her lips.

Surprised by his move, but not really, Jenn did more than let herself be kissed. She kissed him back. Enthusiastically and without reservation. She’d spent the better part of a month pretending not to be attracted to Greg, and she was tired of faking it. Time to press her advantage.

Their tongues tangled with a ferocity fueled by weeks of heightened awareness. Every shared glance, every accidental brush of their fingertips poured into the experience.

When she pulled away, they were both breathless and his arousal pressed into her stomach.

Looking as dazed as she felt, he stroked her chin with his thumb. "Whaddaya say we call out for pizza?"

She leaned in to press her lips to his. That it put the rest of her parts in alignment with his was a bonus, one she savored. He quivered when her lips brushed his ear. "I say, ‘Mangia!’"
AUTHOR INFO
Arlene Hittle is a Midwestern transplant who now makes her home in northern Arizona. She suffers from the well-documented Hittle family curse of being a Cubs fan but will root for the Diamondbacks until they run up against the Cubs. Longtime friends are amazed she writes books with sports in them, since she’s about as coordinated as a newborn giraffe and used to say marching band required more exertion than golf. Find her at arlenehittle.com, on Twitter or on Facebook. 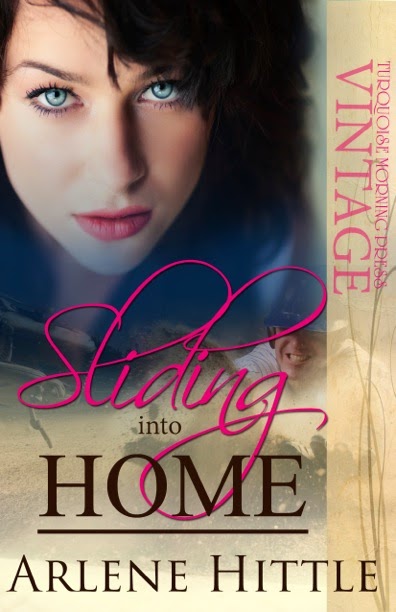 This story was gifted to me in exchange for an honest review.
Greg Bartlesby is a gifted baseball player, so was his father Jake. So much so that Greg has always felt that he is living in his father's shadow, that he never achieves anything on his own merit. Greg acts like your typical rich playboy, he parties hard and he enjoys a variety of different women. On this night he gets into an altercation at a bar protecting a dancer named Jade. Imagine his surprise when said dancer becomes his attorney to help deal with the issue.
Jenn is the attorney, and Jessica her twin is the dancer. No matter how many times she tries to tell this to Greg he is stuck in his belief that Jenn is the dancer and after time she no longer tries to correct him. Greg is sentanced to community hours at his father's charity organization and Jenn becomes his assistant.
Soon it becomes apparent that Greg is not just a pretty face and he and Jenn embark on a relationship. Oh, oh secrets are being kept , identities are confused. This will not bode well for a long term romance. She means to tell him, really she does but life just gets in the way.
Jenn and Greg are great together, he allows her to have some fun, to live her life a little bit, and she in turn reigns him in, while at the same time strengthening the fragile relationship that he has with his father. The sex between them is frequent and quite steamy. They are both seriously attracted to each other and enjoy each other sexually very often.
I thought that this was a great read. It was definately a fun filled story and the pages flowed nicely into one another. I felt angst for Jenn as she waits and waits for the perfect moment to confess she is not really the dancer and we all know it is going to cause a large blow up. Greg does an awesome job of stepping up and becoming a great business man while still keeping baseball his number one priority. I don't know why but I am a sucker for a good sports story. The heros are typically just so very yummy to read about. It was a great clean story and I enjoyed it from the very first page. I would rate this story a 5/5. Looking forward to reading more from this author.
Posted by Unknown at 15:07